Cross-linked polyethylene (PEX) piping has fast become a popular choice for hot water systems. This type of piping is suitable for use in hot water services in both residential and commercial premises.

There are several reasons that have catapulted PEX pipes into this position of popularity, especially for hot water systems. Some of these include the following.

PEX piping is quite inexpensive compared to other options such as copper pipes that cost up to thrice the price of PEX pipes. Installation is also quite easy and straightforward. It is very flexible, and you don't need as many fittings or soldering work as with copper pipes.

The low cost of the pipes and installation both serve to keep the overall costs of installing hot water systems using PEX pipes low. You can expect to stay well within budget with this type of piping.

You may not be able to fully enjoy what your hot water systems have to offer if most of the heat is lost through the pipe walls as your hot water moves along it. This is not a concern with PEX pipes which don't readily transfer heat through their walls.

Heat transfer and subsequent loss are very minimal in PEX pipes compared to metal pipes that do not perform as well in preserving the heat.

Not only does PEX piping conserve energy, but it also has superior tolerance for high temperature as well as pressure. This is especially important because the temperature and pressure in hot water systems can vary greatly. Your choice of piping material must be able to withstand these conditions without them having a detrimental effect on their performance and longevity.

You can be sure PEX piping is suited for the water temperatures it will be subjected to, as well as the intended flow rate and pressure. Its tolerance far outmatches that of other plastic piping options such as PB pipes.

For metal pipes, there is an even higher risk of corrosion under high temperatures. However, PEX does not corrode. You don't have to worry about pinhole leaks in your hot water systems resulting from corrosion or contamination of the water from the corroded pipe material.

PEX piping is quite versatile with many applications. For hot water systems, the outlined benefits make it one of the best choices and most commonly used by plumbers. 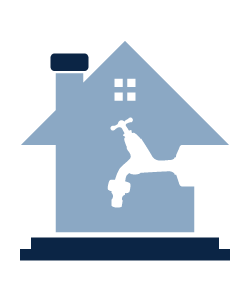 The plumbing of a home is one of those things which is taken for granted until it no longer operates the way it is supposed to. Overflowing toilets, leaking taps and rattling plumbing pipes are all signs your plumbing is not operating the way it should. One way to lessen the chances of needing to call in a plumber is to keep up-to-date with plumbing maintenance tasks around the home. Examples of these tasks include cleaning hair from shower drain traps and being mindful of foods put into the waste disposal. You can find all types of plumbing tips right here to help you maintain your home plumbing in running order. You will also find advice on when it is time to call on professional help to stop small plumbing issues from becoming big ones.